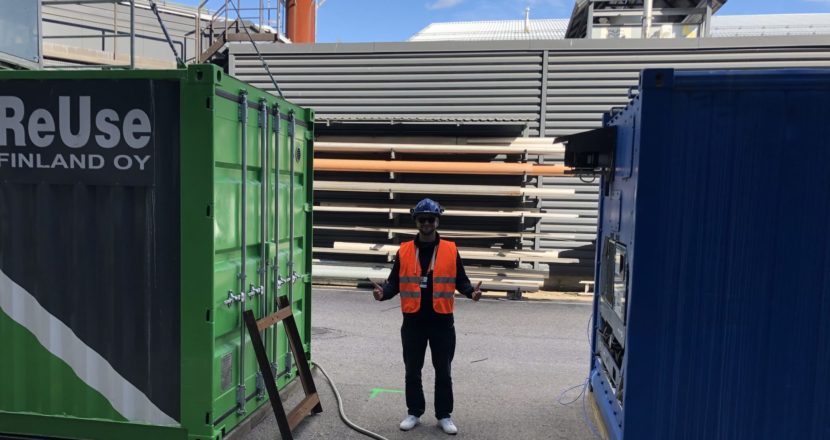 Over 40 % of global greenhouse gas emissions originate from heat and power production.  These emissions can be reduced by shifting to renewable energy sources. For instance, by applying sustainable biomass for heat and power generation, near-zero-emissions are possible and even negative emissions could be reached via carbon capture and storage (BECCS) or carbon capture and utilization (BECCU). According to the recently published discussion paper by VTT, higher value CCU applications including specialty chemicals and polymers have a higher potential to commercialize first.

Business Finland funded BECCU project is developing a new value chain from bioenergy production to sustainable materials by utilizing biogenic carbon dioxide emissions and clean hydrogen. In the project, VTT has teamed up with multiple business partners from various sectors to construct and demonstrate a value chain from biomass to polyol production.

Carbon capture is an essential stage in the value chain. Therefore, one of the first objectives of the project was to demonstrate carbon capture in relevant conditions, which was done via co-operative experiments at Jyväskylä, Finland. The aim of the experiments was to validate the performance of three promising post-combustion capture technologies under realistic conditions by using various CO2 sources. The experiments were planned in collaboration with CarbonReUse Finland, Kleener, and VTT – each of which provided an own application of carbon capture technology for demonstration. The technologies under the demonstration were:

All the technologies are based on CO2 capture via liquid absorbents: the CO2 is bound into an absorbent via physical or chemical absorption and released in a separate regeneration phase via heating or pressure reduction to produce a stream of high-quality CO2 applicable for utilization.

A set of experiments with these three promising technologies were conducted at VTT Jyväskylä in September of 2020. The technologies were demonstrated by using multiple CO2 sources. At first air, N2 and CO2 were mixed to produce synthetic gases with different CO2 levels for the capture processes. In the second phase, flue gases from CFB combustion of various biomass were used. Fuels for the tests were provided by Valmet. Finally, VTT’s capture technology was also tested in the purification of raw biogas, which was provided by Metener.

With all three technologies, a major share of the CO2 from various gas streams was successfully separated to produce a nearly pure stream of CO2. Capture rates varied around 65–85 % depending on the technology and process conditions, whereas the concentration of the produced CO2 reached over 90 vol–% (in wet gas) with all three technologies. For instance, from flue gases released in the combustion of pine chips – containing around 13 vol–% of CO2 in wet flue gas – roughly 70–80 % of the CO2 was captured to produce a stream with a CO2 concentration around 93–94 vol–%. Some of the captured CO2 was compressed, bottled, and transported for further research in Fischer-Tropsch synthesis experiments focusing on CO2 utilization.

Data from the experiments is currently under review and will be reported after analysis. Techno-economic performance properties of the demonstrated technologies will be evaluated and compared to other promising carbon capture technologies, which were studied via a literature review. Results are reported via a Master’s Thesis and further discussed in the following blog posts.

Overall, these experiments mark a successful demonstration of the first stage of a BECCU value chain. Post-combustion carbon capture from biogenic sources was validated in a relevant environment with three different technologies, producing CO2 in a suitable form regarding the next stages of the value chain. The experiments advance the BECCU project forward as planned, taking us a step closer in assessing the feasibility of a potential value chain, which – alongside a complementary solution to climate change mitigation – could provide a green alternative for the production of chemicals.